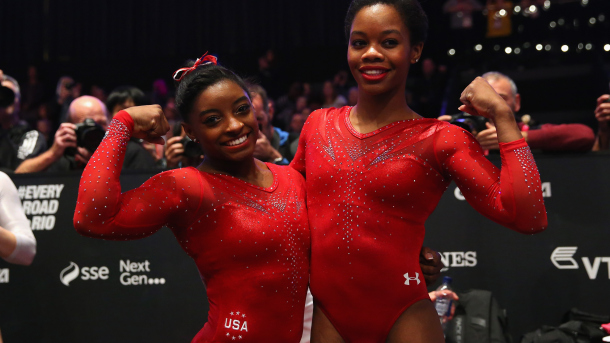 IN LIGHT OF YOUNG BLACK GIRLS KICKING ASS AT THE OLYMPICS, VICE CANADA HAS REPUBLISHED THIS PIECE, WITH SOME GREAT UPDATES. CHECK IT OUT HERE:

I remember being 12 years old and having a dream come alive and die all at the same time. The year was 1992, and because the internet was not a thing, people actually watched the Olympics obsessively. I was no exception. That was the first time I saw Dominique Dawes, a Black gymnast! The Scary Spice* of the US Olympic gymnastic team (Or perhaps Mel B was the Dominique Dawes of the Spice Girls). Awesome-Dawsome (Official nickname) was so gifted and cool that she back flipped her way into a Prince video.

I immediately identified with Dominique’s hair bun and scrunchies… But my own gymnastics dream bubble was burst when I found out that a) to be an Olympic level gymnast, you needed to have been training since before you had the free will to decide you wanted to be a gymnast, and b) if you were 12 and already taller than your mother with size 9 (and growing) feet, you’d be better off in a career that allowed you to wear comically large shoes while loading yourself into a tiny car.

But I cannot tell you how empowering it is for little Black girls to see themselves reflected in pop culture. It’s probably akin to the first time Iggy Azalea saw Blackface and thought, “I’ll just do that!”

So I have an especially low tolerance for people who are entertaining themselves by talking smack about Gabby Douglas and Simone Biles. They are part of the US gymnastics team that are cleaning up in Rio like 1999 Lauryn Hill. Gabby recently got Twitter flack for not putting her hand over her heart during the US national anthem, after WINNING A GOLD MEDAL. She was sweet about it, and apologized for being overwhelmed at achieving more at 20 years old, than any of her critics and their worthless children will ever achieve in life… I don’t work in P.R, but I personally would have been happy if, instead of apologizing for forgetting to place her hand over her heart after defying physics, she had put up 2 middle fingers and said “You’re welcome America.”

Gabby is also the frequent subject of hair criticism. Because it’s not enough for her to work her body so hard that she’ll likely need a hip replacement by the time she’s 30… We should also make this young Black woman, who is a world class athlete, feel ashamed about not conforming to European beauty standards. Gabby thanks for vaulting your tiny body through the air, and making it look graceful… But we’re gonna take back your medal because your naturally curly hair wasn’t straight and slicked back like a chick in a Robert Palmer video. Now if you’ll excuse me, I have to go fuck myself… Thanks!

But the reason I started angrily typing today, was after having read the old comments coming from  an Italian gymnast, regarding the daughter I never knew I wanted, Simone Biles. After Simone won World’s in 2013,  18 year old Italian gymnast Carlotta Ferlito said in an interview, “‘…next time we should also paint our skin black, so then we could win too.‘”…. Now in fairness to Carlotta, she’s a fucking idiot. And she did apologize when she realized that being openly racist is not a good look on the world’s stage.

But luckily, she had Italian Gymnastics Federation official David Ciaralli around, who was able to  clarify what she meant,  “Carlotta was referring to a trend in gymnastics at this moment, which is going towards a technique that opens up new chances to athletes of colour (well-known for power) while penalising the more artistic Eastern European style that allowed Russians and Romanians to dominate the sport for years… Why are there no black swimmers? Because their physical features don’t suit the sport… (Black people) may not have some of the necessities to be, let’s say, a field manager or a general manager… (they) aren’t good swimmers because they don’t have the buoyancy’.”

Of course Carlotta felt as though some sort of Gymnastics affirmative action had taken place. Her own over inflated sense of self has led her to believe that she couldn’t possibly be less entitled to a gold medal than anybody else… Let alone a little Black girl from America. Plus, an Italian gymnastics official backed up what she said as though it was the most normal thing in the world. Whenever a person of colour achieves anything, there will be a group of people (racists) who are extremely eager to give reasons as to why their skin colour should  be used to discount their accomplishment. I know that whenever I achieve anything in stand-up comedy, there are people who believe it’s because I represent an under represented demographic, and not because I am talented or because I work hard… And I have let that feeling humble me out of celebrating my accomplishments. I hate that.

David Ciaralli’s comment betrays what he really feels about Black people. We’re unsophisticated animals who possess power without grace or intelligence. And I could post a clip of Simone and Gabby and Dominique to counteract what he’s said, but I won’t. For the same reason Barack Obama should never have to show a goddamned soul his birth certificate.

EDITED TO ADD: IN THE ORIGINAL VERSION OF THIS POST I HAD THE RACIST ITALIAN COMMENTS LISTED AS HAVING JUST HAPPENED… MY MISTAKE! THESE COMMENTS ACTUALLY CAME AFTER SIMONE BILES WON WORLDS IN 2013. THIS HAS BEEN CORRECTED. SORRY FOR THAT. ALL THE RAGE REMAINS THE SAME. XO