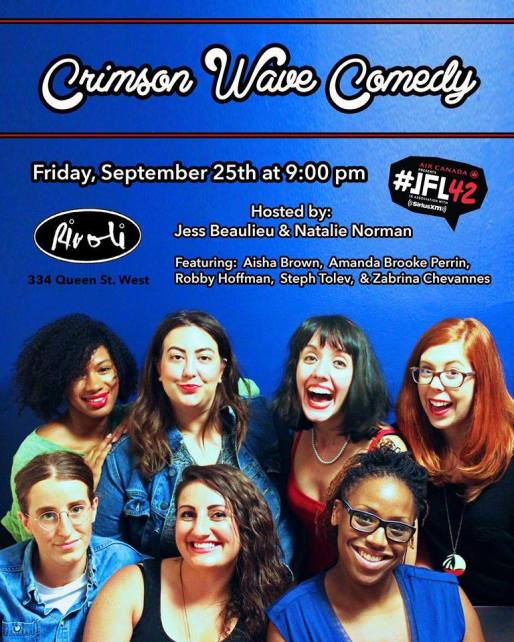 I was a fan of Jess Beaulieu and Natalie Norman, who produce and host the Crimson Wave podcast and comedy show, long before I met them. These women are hilarious and smart… They also have been hugely supportive of me as a person and a comedian. Sitting down with them to talk about periods, anxiety, comedy, overbites was tremendously fun… So I did it twice. Once in May 2015, and once in September 2015, to promote the JFL42 show they put me on. I love them, and I owe them both a kidney!

THE ART OF COMEDY WITH MAGGIE CASSELLA

Maggie Cassella is an incredible person/comic/activist/mentor. I love this lady, and I have yet to have a chat with her that isn’t fun and thought provoking… And where she doesn’t try to talk me out of doing comedy in places that aren’t inclusive, and aren’t welcoming to people who aren’t White men. (I love a challenge?) Maggie invited me and AMAZING comic/writer/shit disturber Ali Hassan, to chit chat with her about doing topical comedy as minorities, about sensitive issues. I was lucky to wedge in a few words edge-wise. These 2 had a lot to say.

Derryck Birch, the name behind “Deez Laughs”, and  a popular and up and coming comedy producer in Toronto, happens to be somebody I’ve been friends with for way longer than I’ve been doing comedy. I’ve been lucky enough to do his shows, and remain his friend. He also irritates me more than any other human I am currently friends with. But I still adore him. We’ve had some great podcast chats, which are fun to listen to, especially if you like to hear 2 people reaching their limitations with one another. These were the 1st podcasts I ever did: April 2014, and August 2014.

Tim Mcdonald is one of the nicest guys in Toronto comedy. He also has a fun podcast where he invites comics on to discuss old episodes of Degrassi. Take a listen, as me and my comic pal Cassandra Sansosti talk about some pre-Drake Canadian television with Tim.

Dave Atkinson and Meg Mackay are two hilarious comics who let me pick a top grossing movie to watch with them, and talk about all sorts of things after. It was nuts! But in the best way. I chose ET… Those two teared up near the end… The child in me is dead, so I was fine. But I had a great time. Give it a listen please!